In 1992, I moved from London to take up a new job in Glasgow. Although I had a long-deceased grandmother who had been born in the city, any family connections had been lost in that part of the world. For me, it was a strange and unfamiliar place.

My new office colleagues had a range of soccer interests, which included, in one case, going down to Manchester every fortnight to watch United. When they learned that I hailed from Leeds, they revealed an impressive knowledge of the Elland Road sides of old. This was not surprising, given the number of Scots who had featured prominently in the Leeds teams of our formative soccer-watching years – Bremner, Lorimer, the Gray brothers, Harvey, McQueen, Jordan et al.

And then, in October, Glasgow Rangers met Leeds United in a two-legged tie in the European Cup.

In those days, it was only a country’s champion side that competed for European club football’s top prize. Rangers had lifted the Scottish title the previous year for the fourth consecutive time (in the unbroken run that would eventually end at nine). Leeds had taken the last of the (pre-Premier League) English First Division honours, heading off my colleague’s Old Trafford favourites by four points in the final league table of 1991-92.

Looking back from today’s perspective of the hugely bloated Champions League, it seems mildly incredible that one of these sides – both of which had lifted European silverware in their time – should face elimination in the season’s autumn. However, by this second round stage, there were only 16 teams left in the competition. (If I have understood the chronology correctly, it was at this season’s group stage that the rebranding to the UEFA Champions League took over).

The stage was set for the “Battle of Britain”. (Or perhaps another “BOB”, given that I recalled that the nomenclature had also been used for the epic Glasgow Celtic-Leeds United European Cup semi-final of 1970). And – after all this time, I’m still not at all sure how – someone in the office acquired the tickets for a group us all to go to the first leg, which was to be played at Ibrox Stadium.

Of course, in addition to having impressive European pedigrees, the two clubs had other – less savoury – reputational baggage, not least the presence of their hardcore hooligan elements. For this reason – plus the recognition that there would be an overwhelming demand for tickets for both games – it was decided that visiting supporters would not be allowed to attend either match.

We sat in the Govan Stand with its excellent view across the pitch. In the minutes leading up the kick-off, with the ground full – and no away support to disturb the proceedings – the intensity of the crowd’s expectations reached a fever pitch. This was no doubt partly due to the importance of the fixture. More pertinently, however, the fact was that over 43,000 Rangers supporters were gathered in the one place. The roar was absolutely deafening – one of the loudest I have ever heard at a sports stadium. The Sash and Billy Boys – the latter with reference to being “up to our knees in Fenian blood” – rang out around the ground.

I watched – and heard – all this with a bewildered astonishment. And I realised that my understanding of the city of Glasgow – or, at least, of one half of it – was increasing apace.

More drama followed immediately. Within a minute of the kick off, on their first attack, the visitors won a corner on their right. The ball came into the Rangers penalty area and was headed out to the Leeds captain, Gary McAllister. In a textbook demonstration of the skill – angling his body, taking his weight on his non-striking leg and keeping his head over the ball – McAllister volleyed the ball into the top corner of the Rangers net.

In its own right, it was undoubtedly one of the best goals I had ever seen. However, in the context of the occasion, it was – literally – breath-taking. (In An Ordinary Spectator, I listed the McAllister goal amongst my “First XI of Sporting Nano-dramas” that I had witnessed during half a century of sports spectating).

The Leeds players mobbed McAllister to the sound of the proverbial pin dropping somewhere in the ground. Or, at least, it would have been, had not the goal elicited a joyful response from a small knot of Leeds United supporters – probably no more than a dozen altogether – further down the stand on my right-hand side.

This only added to the home supporters’ grief. Not only had their side fallen behind before the opening skirmishes had been properly engaged – and conceded a precious away goal into the bargain – but the sanctity of the ground had been invaded by those who were not welcome. There was a rising chorus of vitriolic hostility towards the Leeds supporters, who, after obviously concealing their identity in order to gain entrance to the ground, were now completely open in their allegiance. I thought it wise to keep my counsel: not a hard decision, if I’m honest.

To their credit, Rangers kept their composure and recovered well. They had a fair sprinkling of big match players – Richard Gough, Ally McCoist, Mark Hateley – who, after the early setback, did not panic, but calmly and professionally set about trying to turn things around. They were aided by Ian Durrant – the best player on the pitch – who shaded his midfield duel with the aggressive David Batty and, most noticeably, consistently used the possession that came his way intelligently and efficiently. The action around him was frenetic, but he did not waste a pass.

Roared on by the home support, Rangers had taken the lead by half-time, courtesy of a John Lukic own-goal and a timely demonstration of McCoist’s close-range predatory instincts. As there were no further goals in the second half – a fiercely contested affair conducted against an unrelenting cacophony of sound, the noise seemingly amplified by the acoustics of the stadium – the tie was left tantalisingly poised (at 2-1 to Rangers) in advance of the Elland Road re-match two weeks later.

In the event, the Glasgow side progressed into the next stage of the competition with something to spare. Hateley scored an early goal from long range in the second leg and, on the hour mark, laid on another for McCoist, leaving Leeds well beaten. The Elland Road faithful had to settle for a late consolation goal by Eric Cantona (who, three weeks later, became a Manchester United player).

Following the completion of the tie, back in the office, I took it like a man. My half-hearted protestations – “I’m more a rugby follower, really” – cut no ice at all with the McCoist and Durrant supporters. Meanwhile, the Celtic contingent amongst my colleagues kept their own counsel whilst, I sensed, at the same time being seriously aggrieved that Leeds had not done them the obvious favour.

The 1992 “Battle of Britain” really did feature some of the best British players of the era. In addition to the names already checked, the contest involved Trevor Steven and Gordon Strachan, Andy Goram and Gary Speed, Stuart McColl and David Rocastle… Only Cantona and the Rangers substitute, Pieter Huistra, were foreign internationals. In this respect – as with the concurrent farewells to both the old-style European Cup and the English First Division – the match does now seem to represent the end of an era.

I am bound to fall back on a reference I have used before (most recently in “The Coronavirus provides a reminder”, 2nd May 2020) from H.G. Bissinger’s Friday Night Lights. The author reflects on an incongruous visit made to a high school (American) football game in Marshall, Texas, by a delegation of Russians who had been visiting a nearby US Air Force base: “[T]hey don’t understand a lick of football, but… their understanding of America by the end of the game will be absolute whether they realise it or not”.

By the time I got home that evening, my understanding of Glasgow – and Scotland – had certainly been enhanced. 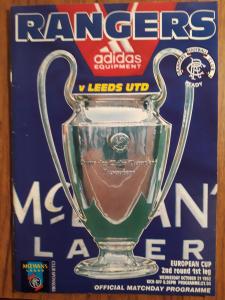