In Scotland, the footprint for the locations of the 10 teams in the Premier Division of the sport of shinty – the Mowi Premiership – covers a large area across the north and west of the country: from Strathpeffer, a couple of miles from the mouth of the Cromarty Firth, to Tignabruaich in Argyll. However, the fiercest rivalry is between two near neighbours – Kingussie Camanachd Club and Newtonmore Camanachd Club – separated by a mere three miles in the Spey valley.

Kingussie gained an entry into the 2005 edition of the Guinness Book of Records as the world’s most successful sports team, having won their league for 20 consecutive years. This run was later extended to include all of the first 12 seasons of the Premier Division, which was established in its present format in 1996. However, the tables have turned in recent years: Newtonmore have won 8 of the last 9 league titles and are the current champions. Moreover, Newtonmore are also the holders of the prestigious Tulloch Homes Camanachd Cup, the knock-out trophy which they have won a record 33 times and which they will defend next month in the 2019 final. (Kingussie were eliminated by Kyles Athletic at the quarter-final stage).

I have reported on the intensity of local sporting rivalries before, of course. An Ordinary Spectator offers reflections on Headingley versus Roundhay (rugby union) and Hull FC versus Hull Kingston Rovers (rugby league) for example, as well as (at a slightly wider level) Yorkshire versus Lancashire in different forms of cricket. On Friday evening, during a visit to the Highlands (with my wife, Angela), we took the opportunity to observe how this played out in Premier Division shinty when Kingussie (sitting at the top of the league) hosted Newtonmore (in fourth place, but with games in hand).

The Kingussie ground at The Dell is about half a mile out of town on the road to the ruined Ruthven Barracks, which were sacked by the retreating Jacobites after their defeat at Culloden in 1746. The arena comprises a flat, well-maintained pitch, bounded by trees on two sides, with a small grandstand on the popular side and an electronic scoreboard to the right of the tea-room behind one of the goals. Overlooking the venue is the 1600 foot Creag Bheag, which Angela and I walked up and over the following day on a route that then took us from Loch Gynack to the scattered remains of the former Raitts Township, where community life was brought to an end by the Highland Clearances of 200 years ago.

Not surprisingly, the combination of the battle for local bragging rights (as well as league points) and the warm weather generated a sizeable crowd: perhaps 500 or so. We stood in the shade towards one end of the pitch, where we had a good view of the whole expanse as well as a clear sight of the intricacies of the close-quarter play when the ball came into our vicinity.

Although shinty’s playing area is much larger than that for rugby or soccer – pitches are usually 140-170 yards long – it was noticeable that the action shifted from one end to the other remarkably quickly, as the defensive players on both sides were adapt at striking the ball considerable distances in hurried circumstances. There were obvious overlaps with the skill-sets of not only golf and hockey, but also tennis: the re-starts when the ball went out of the play on the side lines took the form of a tricky double-handed overhead serve with the ball being struck by the toe-end of the stick.

What also came across very clearly was the full commitment of the players. It takes some bravery to compete for the ball, either in the air or on the ground, amidst the furious wielding and full-blooded swings of the sticks. Some of the players wore helmets, though not all. Early in the match I judged, in particular, that it would be very unlikely that I would ever volunteer for the position of goalkeeper: a decision that was emphatically confirmed later on.

The close matching of the two sides was evident. The play took the form of a series of close tussles, with very little time available to the player with the ball. Unlike in soccer, where a side might make a series of unchallenged passes, without gaining ground, in order to control the tempo of the game, there was no respite here. Likewise, unlike in rugby, where there can be a fluidity of movement through one side running or passing the ball through several phases of play, here there was a rapid turnover of possession between the sides.

I sensed that the individual players were familiar with their direct opponents. On some occasions, when there was a hold up in play, pairs of players seemed to engage in friendly conversation, as if enquiring about the health of their respective families. Seconds later, play having restarted, they would be crashing into each other without any holding back. I thought that the referee handled the game well. He seemed to pull up most of the obvious fouls, without detracting from the physical component of the encounter.

Kingussie had most of the early play and it was something of a surprise when, after 10 minutes, Newtonmore took the lead, a long-range shot being misjudged by the home goalkeeper. Kingussie’s mobile forward line posed a continual threat, however, and, after the interval, two impressive strikes appeared to have secured their side the win. Then, in the third minute of added time, Kingussie carelessly lost possession in midfield and a final Newtonmore attack saw them squeeze home the equaliser to the delight of the visiting support. (Unfortunately, there was a lack of available team sheets with which to identify the players). The final score was 2-2.

After the final whistle sounded, Angela and I walked down the touchline towards the tea-room. When we reached the end of the pitch, we noticed that no-one else seemed to have moved very far and that the players were still out on the pitch. At first, I thought that this might have been analogous to watching the rugby league in Toronto (as reported in Still An Ordinary Spectator), where the match is just part of an afternoon’s socialising for the local spectators. However, it transpired that for this Kingussie-Newtonmore encounter – with the league points having been shared – there was to be a separate penalty shoot-out to decide the winners of the Sir Tommy MacPherson Memorial Trophy.

We had a close view of this from behind the goal (though safely to the side). The players took turns to blast the ball at the respective goalkeepers, the latter attired sans helmet or gloves. The outcome was decided when one of the Newtonmore penalty-takers fired his shot straight on to the Kingussie goalkeeper’s fingers – a guaranteed fracture, I would have thought – and the ball stayed out of the net. The next Kingussie penalty was taken by the goalkeeper himself, who duly and emphatically dispatched his effort. When the final Newtonmore attempt sailed over the bar, high and handsome like an 8 iron, the cup was Kingussie’s.

And so ended an enjoyable evening. I had not only added another sport to the list of those on which I have reported in book or blog, but I had also – to my reward – done so in the context of the local community in which it features so significantly. If there were any doubt about that, it was assuaged by the sight of the toddlers-– some aged no more than 3 or 4 – running on the pitch, complete with their sticks of appropriate size, at half-time and at the end of the game. Some will be participants in future Kingussie-Newtonmore encounters, no doubt.

The brief match report in today’s edition of The Scotsman states that Kingussie’s goalscorers were Ruaridh Anderson and James Falconer. The Newtonmore goals were scored by Fraser MacKintosh and Conor Jones. 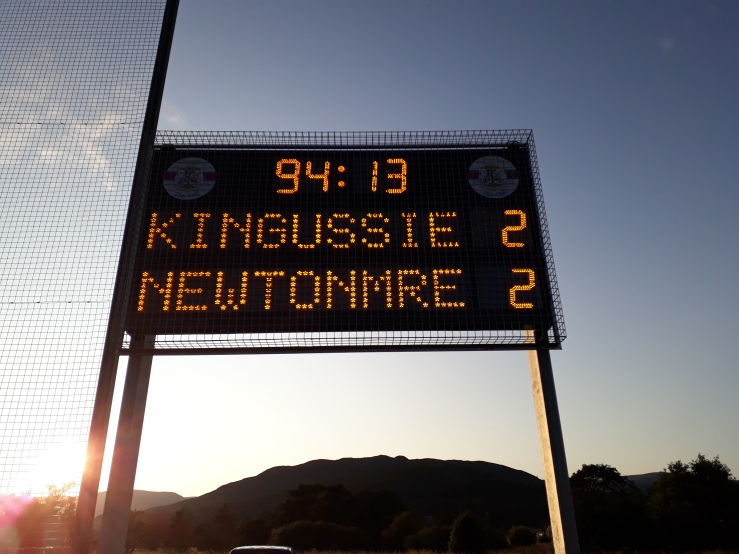