Four years ago this month, I attended the first leg of the tie between Glasgow Celtic and FC Internazionale Milano (Inter Milan, of course) in the last 32 of the UEFA Europa League. In Still An Ordinary Spectator, I reported that it was a rousing match (3-3) featuring a superb performance by the visitors’ Kosovo-born Swiss international Xherdean Shaqiri (who is now plying his trade with Liverpool ). Inter Milan went on to win the second leg 1-0 a week later.

Yesterday evening, Celtic were again at home at the same stage of the competition against attractive opposition, this time Valencia CF.

The two sides had reached the last 32 by different routes. Celtic had failed to reach the group stage of the Champions League, having been beaten in a qualifying round by AEK Athens, and so they had had to go through the group stage of the Europa League (which they just managed to do). By contrast, Valencia had featured in the Champions League, but had only finished third in their group behind Juventus and Manchester United, thereby qualifying for what might be considered the consolation tournament.

Not that Spanish teams take this competition lightly. Since Valencia themselves won the then UEFA Cup in 2003-04, the UEFA Cup/Europa League has been won 8 times by teams from Spain – the current holders being Atletico Madrid – with the runners-up being provided on two other occasions. It was also in 2003-04 that Valencia – founded 100 years ago next month – won the last of their 6 La Liga titles, the manager at the time being Rafael Benitez (who is now plying his trade with Newcastle United). Valencia are currently in eighth place in the Spanish league table – in contrast with their hosts, whose six-point lead at the top of the Scottish Premiership suggests that they are firmly on course for an eighth successive title.

I had a good seat in the Lisbon Lions Stand. Below me and to the left, at the end of the Main Stand, was the group of 300 or so visiting supporters, their presence cordoned off by stewards and police. They (the fans, not the police) kept up a steady series of chants of support throughout the evening, to which their team responded in some style.

The remainder of the near 60,000 crowd seemed to be bedecked in green and white and, as I had expected, the atmosphere created as the minutes ticked down to kick-off was electric. It can only be a totally emotionless person who is not affected by the Celtic fans’ passionate pre-match rendition of You’ll Never Walk Alone. As ever, it would be a test of the skill and character of the visiting players – and officials – to perform to the best of their abilities. (As it turned out, the referee – Ovidiu Hategan of Romania – also had an excellent game).

I have to say that I sensed in the opening minutes that this was not going to be Celtic’s night. It was noticeable that most of the early fouls were committed by Celtic players, not through any obvious desire to rough up the opposition, but because of the speed and skill with which Valencia passed the ball so as to manoeuvre themselves into threatening positions. By contrast, Celtic’s tempo seemed – throughout the match – to be lower, even to the extent of being sluggish on a couple of the backpasses to the goalkeeper, Scott Bain, which forced him into hurried clearances.

I thought the best players in the first half were the young Frenchman Mouctar Diakhaby, a calm presence in the centre of the Valencia defence, and his captain, the midfielder Daniel Parejo. However, as the interval approached, Celtic forced a couple of attacks on the Valencia goal and the home supporters’ hopes were increased. The twenty-something supporter next to me whispered to his chum: “I sense a goal before half time”.

He was absolutely right, though perhaps not quite in the manner he had wished. A few seconds later, Parejo’s defence-splitting pass paved the way for Denis Cheryshev’s opening strike. I was surprised to read in the excellent match programme that Parejo has won only one cap for Spain and it was disappointing that he did not reappear for the second half. His replacement was another Frenchmen, Francis Coquelin, the combative midfielder battle-hardened after ten seasons with Arsenal.

Valencia scored again shortly after the re-start. As with the first goal, Celtic lost possession near their opponents’ penalty area and, this time, Valencia broke quickly down the left-hand side before Cheryshev’s accurate cross was steered home by Ruben Sobrino. It was no doubt at this point that the jubilant throng of Valencia supporters below me confirmed to themselves that their journey had been fully worthwhile.

In Still An Ordinary Spectator, I also reported on another football match in the 2014-15 season – a fourth round William Hill Scottish Cup tie between St Mirren and Inverness Caledonian Thistle – and noted that, in the visitors’ side, the 19 year-old Ryan Christie “was particularly impressive with his excellent close control and the vision for a penetrating pass with his cultured left foot… a player of rich promise”.

This season, Christie has established himself in the Celtic team, scoring ten goals in the process, and I was interested to see how he would fare against this level of opponent. In truth, he and his colleagues in the Celtic midfield had a hard time against opponents who marked closely and, when in possession of the ball, surrendered it only with the greatest reluctance. Christie was replaced on the hour as part of a double substitution in which the Celtic manager, Brendan Rodgers, brought on two strikers. “They’re going for it”, said my neighbour on the other side, though I detected that his renewed optimism was somewhat guarded.

Rightly so, as it turned out. Valencia’s defensive formation retained its shape and discipline and, as the Celtic errors mounted – a misplaced pass, a wasted cross – my neighbour took to bowing his head and running his fingers over his eyebrows: it was an individual’s reflection of the general resignation that seemed to take hold of the Celtic support. “They were second best tonight”, I ventured to him at the final whistle. “Miles behind” was his instant reply.

Celtic’s last serious tilt at European silverware was the UEFA Cup final of 2002-03, when, with an attack led by Henrik Larsson, they lost to Porto 2-3 after extra time in Seville. Since then they have won the domestic league on eleven occasions. For their supporters – and no doubt, all associated with the club – the mismatch between domestic and continental success remains frustratingly wide.

Of course, all is not lost for Celtic in this tie. The second leg is to be played in Valencia next week and the 0-2 deficit could be overturned. I note, however, that Wikipedia describes the 55,000 capacity Mestalla Stadium as “renowned for its steep terracing and for being one of the most initimidating atmospheres in Europe ”. Another test of the visitors’ skill and character. 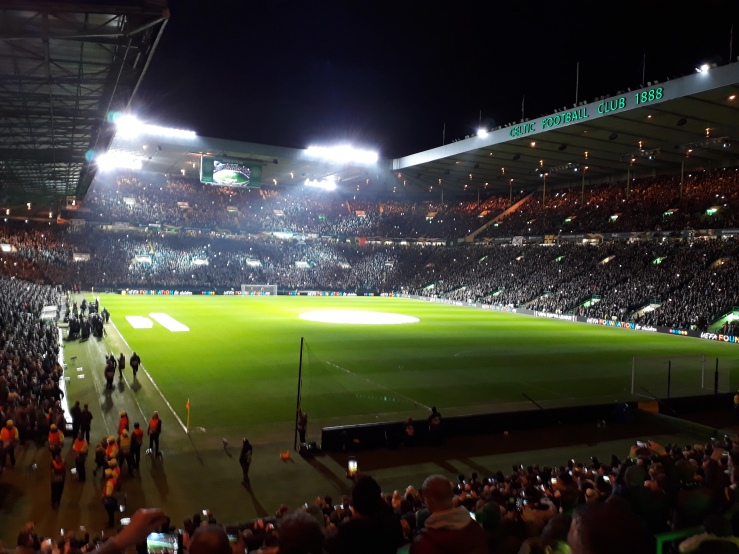