By the time the game kicked off (in the early evening), I was about to begin my return journey to Glasgow from a place with a history of far more serious – and bloody – conflict between the Scots and English. Over the centuries, Berwick-on-Tweed was the location of continual and bitter dispute – including sacking and massacre – the town changing hands more than a dozen times in the 400 years before it was finally retaken for England by the future Richard III in 1482.

Thankfully, the occasion of my visit was for more peaceful matters: Berwick Rangers versus Montrose in the Ladbrokes Scottish Professional League Division 2. 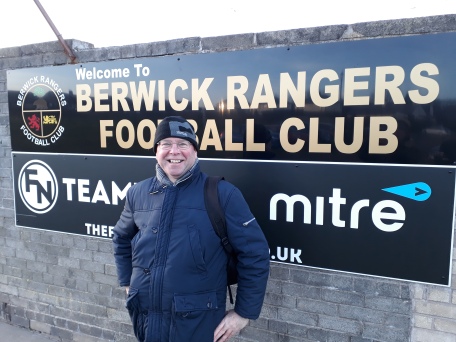 The later border tensions of the (first) Elizabethan era are revealed in the town’s extensive defensive ramparts that date from that time, the restoration of which now provided an invigorating walk on a sunny, but chilly, day. I was following in good company. A plaque on the walk’s route noted that LS Lowry had been a frequent visitor to Berwick and that one of his pen and pencil sketches – Football Match – captured an impromptu soccer game being played in one of the dry moats. Sure enough, when I reached the top of the rampart, I had a clear view of two teams battling it out on a pitch in the middle distance – red and yellow, as if Manchester United were playing Wolverhampton Wanderers – the shrill blasts of the referee’s whistle and the cursing of frustrated players carried towards me on the stiff breeze coming off the sea.

After a quick lunch in a cafe near the Town Hall (1754-60) – a cheese and tomato toastie followed by a slice of a rather good toffee cake – I walked over Berwick Old Bridge (1610-24) and down the road to Shielfield Park. I paid my £7 senior’s entrance fee and then a further £7 for a Berwick Rangers coffee mug in the club shop, fully recognising that this would not assist in my wife’s current desire to rationalise our stock of kitchenware. The Berwick drinking vessel has thus been added to an eclectic list that includes Arsenal FC, the Washington Redskins and Melbourne Cricket Ground. 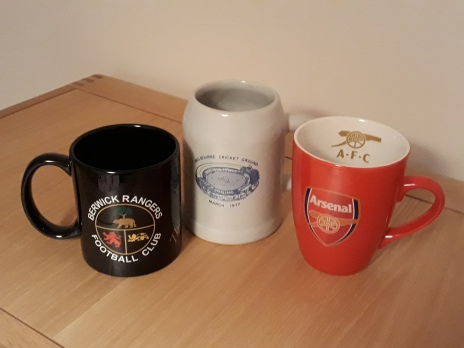 Montrose are having a good season. Prior to Saturday’s match, they were 5 points clear at the top of the league – chasing the automatic promotion slot – albeit that they had played one game more than their nearest challengers, Peterhead. For them, this is unfamiliar territory: the club has been nestled in the fourth tier of Scottish football for over 20 years.

By contrast, Berwick began the day third from bottom of the 10-team division, although they were probably already sufficiently well clear of bottom-placed Cowdenbeath to be concerned about the end-of-season play-off match with the winner of either the Highland League or Lowland League to decide next year’s league status. An away draw at Peterhead in the previous match had aided their cause.

Montrose’s championship challenge has been assisted by their excellent away form, which has gathered in more league points than in their home fixtures. Before Saturday, 9 matches had been won out of 13 played with only 8 goals conceded. It was a surprise, therefore, that it was a pair of defensive lapses that twice allowed Berwick to draw level after Montrose had taken the lead.

After Berwick had conceded an early own goal, it was a defensive misjudgement between the Montrose centre backs and the goalkeeper Allan Fleming, when a high kick downfield was held up in the wind, that allowed the skilful Ousman See to nudge home the first equaliser. Then, midway through the second half, a Berwick free kick taken by Paul Willis from wide out on the left was allowed to pass through a crowd of players and into the far corner of the goal. At 2-2 with 25 minutes left, there was all to play for – and both teams did indeed search enthusiastically for the winner – but the score remained unchanged, the end result being a fair reflection of the afternoon’s efforts. The nearest to a winning goal came from another (and closer) Willis free kick, which was splendidly saved by the acrobatic Fleming.

Just as at Murrayfield – indeed, just as at virtually any regularly held sporting event – the events at Shielfield Park provided all the participants with their own rituals and customs, to be drawn upon as they wished. The plastic cup of Bovril from the fast-food stall; the 50-50 half-time draw (a Mr Harrison won £126); the manager’s reflections in the excellent match programme on the unjust defeat in the previous home game; the black and gold woolly hats; the announcement of the man-of-the match (Berwick’s Darren Lavery); the reporting of the attendance (417)… It is the comfort of the familiar. I also noted that both managers shook the hands of all their respective players at the end of the game, that the stewarding was pleasantly low-key, and that the referee (Craig Charleston) had a sound match.

And so this was Berwick on a Saturday afternoon. A town of about 12,000, of whom a very small percentage had ventured out to watch their soccer team. A town with its cafes and pubs and hairdressers and charity shops…all seeking to keep themselves afloat in a challenging economic climate. A town with a history.

I think it’s the sense of place and time that I always have difficulty putting into context. Above the steps leading down to the platforms at Berwick railway station is a large plaque marking the spot where, in 1292, Edward’s I’s arbitration in favour of John Balliol (rather than Robert Bruce) in the contest for the Scottish crown was announced.

I walked down the steps towards the waiting room. The ruins of the castle were just a little way over to the left. It was 700-plus years later and I had just been to see a football match about a mile and a half down the road.